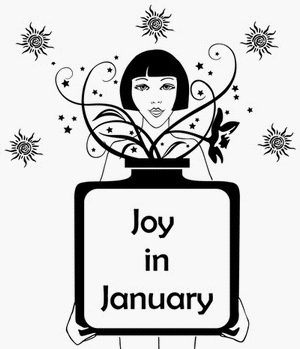 For the Joy in January 2012 project, fourteen of the Guild members blogged about how naturally-scented products may help alleviate the depression and lethargy that often overcomes folks who live in dark, cold northern climates. The lack of sunlight during the short days of autumn and winter is a real problem, and those afflicted with this problem are said to suffer from SAD - Seasonal Affective Disorder.

Fourteen Guild perfumers, associates and suppliers took part in the enlightening, bonding project, including some who had never blogged before. All found the project heartwarming and a personal outreach and engagement exercise that opened their eyes - and the eyes of the readers - to new possibilities in dealing with SAD using natural fragrnce. The link to the President of the Guild's blogs can be found here, and you can follow the links provided to other Guild participants on that page. 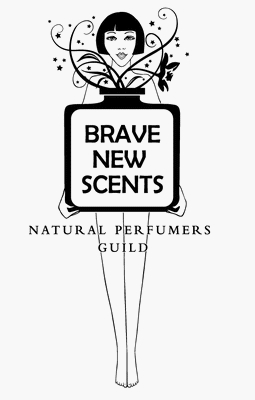 Who: Professional Perfumers of the Natural Perfumers Guild Why: Because we're brave outlaw perfumers, and we're pushing the envelope further, into 21st Century fragrance territory.

Where: The Natural Perfumers Guild perfumer's blogs and Internet blogs.

When: Launch Oct. 1, 2011 The Vision of this Project: The new avalanche of glorious aromatics, including the ones we create ourselves, deserve acknowledgement as perfume materials as the Outlaw Perfumers create Brave New Scents.

The Outlaw Perfumers of the Natural Perfumers Guild are staking out more aromatic territory, moving into the 21st Century with an attitude of conquering new frontiers. The Guild perfumers are focusing on capturing the beauty of aromatics introduced after the year 2000, or that have been made available to us via the Internet after 2000, or that we created ourselves. Many of these are untested by regulatory agencies. History is our guide, since many of these have been in use for hundreds of years, such as ambrette seed absolutes, kewda flower absolutes and others from India.

How brave, how sensible! O wonder! How many goodly creatures are there here! How beauteous mankind is! O brave new world! That has such people in it! ~ Miranda in Shakespeare's "The Tempest", Act V, Scene I

I want God, I want poetry, I want danger, I want freedom, I want goodness, I want sin. ~Aldous Huxley

Perfume Organ Reference from Aldous Huxley's novel Brave New World: "The scent-organ was playing a delightfully refreshing Herbal Capriccio - rippling arpeggios of thyme and lavender, of rosemary, basil, myrtle, tarragon; a series of daring modulations through the spice keys into ambergris; and a slow return through sandalwood, camphor, cedar, and new-mown hay (with occasional subtle touches of discord - a whiff of kidney pudding, the faintest suspicion of pig's dung) back to the simple aromatics with which the piece began. The final blast of thyme died away; there was a round of applause; the lights went up."

In the Brave New Scents project, the Guild perfumers are likened to the members of Huxley's novel. Like the starring characters in the novel, these brave new perfumers go against the grain and out of bounds, thwarting the ever-expanding regulatory nanny state in order to showcase aromatic extraction feats and use 21st Century aromatics that are not necessarily condoned in mainstream perfume society. Some of the brave new perfumers throw convention to the wind and blend perfumes that showcase their skill extracting scent from previously non-commercial plants, flowers, and substances. Others use the palette of newly-available essential oils, concretes, absolutes and CO2 aromatics, sometimes blending in their own artisan extractions, be they infusions, tinctures or distillations. What aromatics will this include?

The Guild perfumers were provided with an extensive list of 100+ 21st Century aromatics, which was compiled by Guild President Anya McCoy and Guild Manager Elise Pearlstine. They recognized that before the year 2000, most artisan perfumers purchased their natural aromatics from aromatherapy suppliers. These suppliers did not carry many absolutes, and some aromatics available to the mainstream perfumers were not known, or available, to them. Suppliers for mainstream perfume houses did not carry many, if any, aromatics from India, such as jasmine sambac, lotus, champaca and other tropical scents. We now have the bounty of newly-available delightful absolutes such as aglaia flower, boronia, ambergris and many more.

Newly-conceptualized and extracted aromatic wonders such as lilac flower and the amazing world of CO2 and SCO2 extractions are now available to the fragrance industry. Also included are the hand-extracted fragrant bounties from the gardens of the perfumers themselves, such as peony enfleurage, Grand Duke of Tuscany jasmine sambac enfleurage, and a myriad of distillations and tinctures. To make it interesting, the perfumers were allowed only one "wildcard" aromatic from the era preceding the year 2000. Invited bloggers will review the Brave New Scents perfumes (2) that they have been paired with. All bloggers will receive all 10 perfumes, and will review two of them, with the exception of CaFleureBon which will review all ten.

Clickable links for the following can be found here

All I am a Redhead http://alliam-aredhead.blogspot.com/ 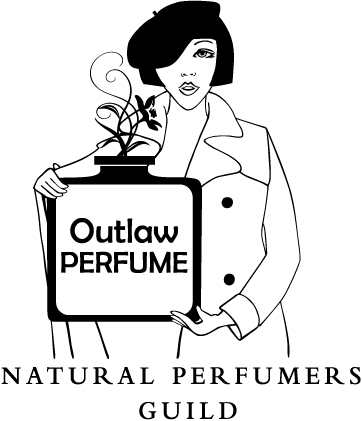 Soon after I started blogging in 2006, I began to write of the incredibly restrictive and unreasonable "guidelines" of the International Fragrance Association, and the resultant laws from the European Union that effectively killed perfumery. True, they also ranked some synthetics as "dangerous" (brain disruptions), but the list of naturals, which had been used for centuries without major problems, was overwhelming. I rarely bother to blog about these issues anymore. I discovered I was the ONLY perfumer doing so at the time, and it cast a bit of a bitter pall over my blog. I'd rather be blogging about the beauty and luxury of naturals, so here I am. I passed the ball on to other bloggers!

Nine bloggers will be participating, and you can find their links at the end of this post. They're all insightful, intelligent and passionate about perfumery. Their readership far outstrips mine, and the Outlaw Perfume project is a great way for them to spread the word about this abomination against natural aromatics. They also get to sample the gorgeous perfumes created by the Natural Perfumers Guild members (disclaimer: I'm the president of the Guild) and offer a giveaway of the Outlaw Perfume on their blogs.

I've always been someone who challenges authority. In the 60's, I marched for civil rights, against the Vietnam War, and for women's rights. This IFRA and EU-driven blacklisting agenda against naturals must stop. Readers, please remember that they're stomping on *your* rights to choose what you put on or in your body. Anyone can use common sense and not put perfume on skin that is exposed to sunlight, so, there, the photo-sensitization problem of some of the citruses, angelica root, etc., solved ;-)

The Mystery of Musk

Who: The Perfumers of the Natural Perfumers Guild and Internet Bloggers and Forum members. Only 10 perfumers will be selected in a random draw, conducted by a third party. This is to avoid an excessive number of participants, which can overwhelm the evaluators. This is a cooperative blogging event, and the bloggers should link to the other blogger's websites. You will be provided with an image to post on your blog that will be the unifying visual for the co-op.

Why: To celebrate the Fourth Anniversary of the Guild. We think it would be a great idea to get out there on the Internet blogs and forums with a creative, artistic expression of our beloved perfume base note, the musk.

Where: Internet blogs, Basenotes and the Yahoo Natural Perfumery group.

What: Musk, musk and more musk. Perfumistas are fascinated with musk, there is no doubt about that, so The Mystery of Musk is the theme. Perfume can be in an alcohol or oil base.

When: Announcement on the Internet forums and blogs Tuesday, June 1, 2010. Perfume to be completed and mailed and in the hands of the recipients by Wednesday, June 30, 2010. The bloggers and evaluators reviews of the perfumes will be posted between July 1 through the 7th, 2010.

The Vision of this Project: It's as if 12 artists are invited to exhibit their paintings on a theme. They work alone. On a given day, they are all to bring their paintings to an exhibit gallery for all to see.The viewers are shown the beauty and diversity of the different interpretations on a theme. It is a great experience for the artists and the viewers. Our Art and Musk: If there is one thing I've observed during my long tenure on the Internet, musk is the Number One subject of interest among those who love all kinds of perfume, both natural and synthetic. Musk fascinates!

Many perfumistas realize that natural perfumers don't use synthetic musks and civets and such, but that we search for alternatives that give the same effect. Some of the natural perfumers use cruelty-free animal musk products. Some only use botanical musk products. First, let's define musk: it isn't limited to the musk deer, of course.Neither is the legend and myth behind musk scents. Musk can mean base note, fixative, sexy, sensual, pheromone-inciting scent.

Natural perfumers can take that and define it according to our aesthetic, and build our musk perfume with it. Here's what the structure of the project is:

1. Each of the bloggers and evaluators will receive one sample of each musk perfume.

2. The owner of Basenotes will select 5 members of the forums on his site to participate. Each of the members will receive 1 sample of the musk perfume from each of the 12 perfumers.

3. There will be 5 members of the Yahoo Natural Perfumery site chosen to be evaluators. If they do not blog, they will be expected to write about the perfumes on the NP site. Each of the members will receive 1 sample of the musk perfume from each of the 12 perfumers.

Jane Cate - A Wing and a Prayer Perfumes

All of the samples should reach the bloggers and evaluators by June 30th. During the week of July 1 - 7, 2010, reviews will be posted on the blogs and forums. This is very exciting and I can't wait to read everyone's take on the cooperative perfuming project!